President Abraham Lincoln was known for his soft heart when it came to both children and animals. In fact, the Lincoln White House became host to a variety of animals — including a spirited pair of goats named Nanny and Nanko.

As typical goats and ones not swayed from their natural conduct by being in and around the White House, Nanny and Nanko liked to chew things, including flower bulbs and furniture.

Their antics did not stop there, however.  Using kitchen chairs as makeshift carts, Lincoln’s sons Tad and Willie often had the goats pull them through the White House. Tad once scattered a group of White House visitors by driving a goat-pulled chair through the East Room crying, “Get out of the way there!” as he went.

In his book Lincoln At Home, David Herbert Donald writes this about the incident: “As dignified matrons held up their hoop skirts, Nanko pulled the yelling boy around the room and out through the door again.”

Probably because of the mischief she got into, Nanny was taken by wagon to the Soldiers’ Home in Washington, D.C., but she caused such destruction to the garden there that the goat was summarily returned to the White House.

On Aug. 8, 1863, President Lincoln wrote in a letter to his vacationing family:

“Tell dear Tad, poor ‘Nanny Goat’ is lost; and Mrs. Cuthbert & I are in distress about it. The day you left Nanny was found resting herself, and chewing her little cud, on the middle of Tad’s bed. But now she’s gone! The gardener kept complaining that she destroyed the flowers, till it was concluded to bring her down to the White House. This was done, and the second day she had disappeared, and has not been heard of since. This is the last we know of poor ‘Nanny’.”

Nanny was found again safe and sound, though, because a year later, Lincoln wrote in a telegram: “Tell Tad the goats and father are very well — especially the goats.”

“The Kindest and Best Goats in the World”

As you might expect, the family goats and their behavior became a point of disagreement between the president and the rather particular Mrs. Lincoln.

The goats did, however, bring the president some joy. The first lady’s seamstress, Elizabeth Keckley, recalls in a letter:

“Mr. Lincoln was fond of pets. He had two goats that knew the sound of his voice, and when he called them they would come bounding to his side. In the warm bright days, he and Tad would sometimes play in the yard with these goats, for an hour at a time. One Saturday afternoon I went to the White House to dress Mrs. Lincoln. I had nearly completed my task when the President came in. It was a bright day, and walking to the window, he looked down into the yard, smiled, and, turning to me, asked: ‘Madam Elizabeth, you are fond of pets, are you not?’

‘Well, come here and look at my two goats. I believe they are the kindest and best goats in the world. See how they sniff the clear air, and skip and play in the sunshine. Whew? What a jump,’ he exclaimed as one of the goats made a lofty spring. ‘Madam Elizabeth, did you ever before see such an active goat?’

Just then both goats looked up at the window and shook their heads as if they would say, ‘How d’ye do, old friend?’

‘See, Madam Elizabeth,’ exclaimed the President in a tone of enthusiasm, ‘My pets recognize me. How earnestly they look! They go again; what jolly fun!’ and he laughed outright as the goats bounded swiftly to the other side of the yard.”

Mrs. Lincoln gave the goats away after her husband’s death, according to the seamstress.

President Benjamin Harrison also had a famous goat at the White House. 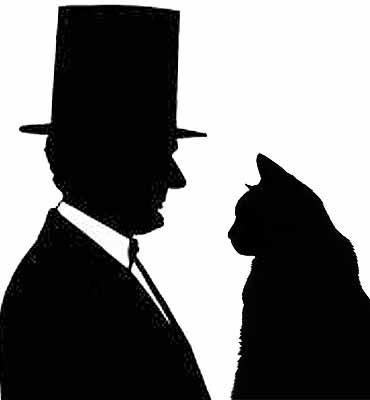 Two of President Lincoln's cats were named Tabby and Dixie. He also brought a few ... 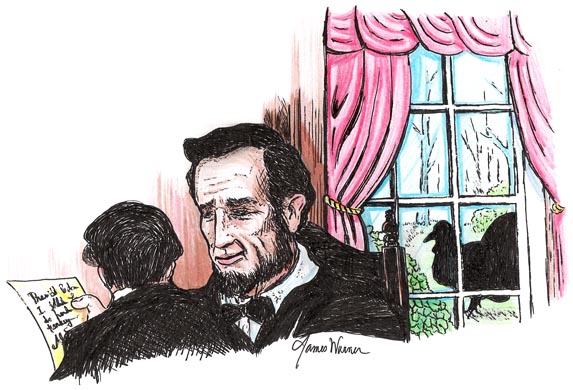 Did you know President Lincoln signed a special order to save the life of a ...