When Susan Ford, President Gerald Ford’s teenage daughter, was in school for the day, her cat, Shan, would often hide under the bed in the Lincoln bedroom.

According to a United Press International article published in May, 1975, Shan often “tiptoes down the backstairs (of the White House) from the third floor, carefully nosing its cream and chocolate head to make sure Liberty and other alien beings are not around.”

Susan, then 17, said she fed her cat canned food, noting that the first family hardly ever had table scraps for their pets “because we always clean our plates.”

Susan commented that Shan decidedly preferred women over men, but she added that the cat made an exception for the president, often rubbing against his legs and waiting for an opportunity to get into his lap.

Don’t Leave Home Without the Cat

What Shan decidedly did not like, Susan explained, was being left behind.

When the family went on a skiing trip to Vail, Colo., for example, Shan apparently wailed miserably while they were gone. To show her displeasure when they returned, Shan bit both Susan and first lady Betty Ford on their legs.

The Fords had the cat declawed to prevent furniture (and people) scratching.

An Easter Present That Purred

President and Mrs. Ford gave Shan to Susan in 1973 as an Easter present, and the cat moved with the family from their home in Arlington, Va. to the White House when Ford became president in 1974.

The cat, whose full name was Shan Shein, was named after a town the Fords visited in China. 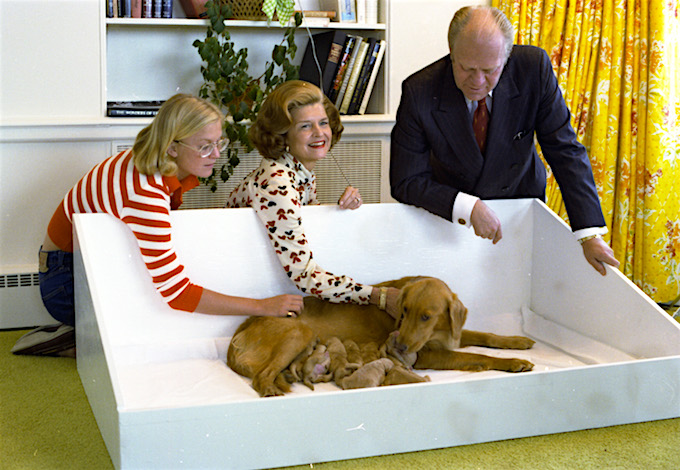 President Gerald Ford's dog Liberty was a golden retriever. Here's a funny story about a ...