During a time when it was thought that young women should be seen and not heard, Alice Roosevelt didn’t fit the mold.

Teddy Roosevelt’s oldest child — and his only child with his first wife, Alice Lee, who died two days after giving birth — was 17 when her father took office as president in 1901.

In addition to her good looks, Alice became known for her outrageous — at least for the time — behavior.

Apparently she chewed gum, played poker and smoked cigarettes. Dubbed “Princess Alice” by the press, Alice also was known for her extensive and expensive wardrobe. Her father once said, “I can either manage Alice or the country. I can’t do both.”

Alice had a pet garter snake that she was fond of carrying around in her pocketbook and displaying at unexpected times.

She named the snake Emily Spinach because it was “as green as spinach and as thin as my Aunt Emily,” she said in an interview.

Snakes Run in the Family

Alice’s younger brother, Quentin, also had a fondness for snakes.

The story goes that Quentin purchased four snakes at a Washington, D.C. pet shop and brought them to the Oval Office to show his father. White House officials and Cabinet members were used to one of the Roosevelt kids interrupting important meetings, and they waited patiently when the young boy ran into the room during a meeting and greeted his father at his desk.

When Quentin released the four snakes on the desk, however, several dignitaries scrambled for cover.

Quentin was able to capture his snakes, but apparently his usually easy-going father was not amused. The snakes were returned to the pet shop that day.

A Siamese If You Please

Several Siamese cats, known for their “talking” and for their inquisitive personalities, have made their ... 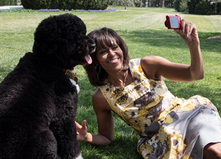 Michelle Obama snapped the famous self-portrait of her and Bo in August, as they were ...