The White House was definitely a lively place during Teddy Roosevelt’s presidency.

Theodore Roosevelt, our youngest president, took the oath of office in 1901 after the death of President William McKinley. He and his wife, Edith, moved to Pennsylvania Avenue with six children and a veritable menagerie of well-loved animals (see full list of their pets below this article).

One of the more colorful — and noisy – of the Roosevelt pets was Eli Yale, a Hyacinth macaw parrot. Apparently named after Elihu Yale, the 18th-century British merchant and philanthropist who is the namesake of Yale University, the colorful macaw is best known for being in a photograph on the arm of a well-dressed and serious-looking Teddy Jr., only 14 at the time.

This 1902 portrait was taken in the White House conservatory, where the bird must have enjoyed spending time.

Unfortunately, the White House greenhouses were torn down that same year to make room for an office annex that evolved into the West Wing.

“Loud” is the first word that comes to mind when macaw owners describe their pets. In fact, you can hear macaws in their native rainforest habitat from at least five miles away.

Playful and active, Hyacinth macaws have a lively personality to go along with their size, which can reach up to 42 inches in height and 3 to 4 pounds in weight. The largest parrot by length in the world, the Hyacinth macaw is a striking bird with vibrant blue feathers, a large black curved beak, and bright yellow accents on its face.

The Roosevelt kids – and their pet-loving dad — undoubtedly enjoyed the fact that macaws are very good at mimicking speech and sounds. Macaws require quite a bit of interaction from their owners and can get especially noisy when they are bored.

Chances are, however, that Eli was well entertained by the rowdy Roosevelt family.

President Roosevelt himself kept a sense of humor about the bird. He wrote in June 1902, “Eli [is] the most gorgeous macaw, with a bill that I think could bite through boiler plate, who crawls all over Ted, and whom I view with dark suspicion.”

Here is a video explaining more about Hyacinth macaws: 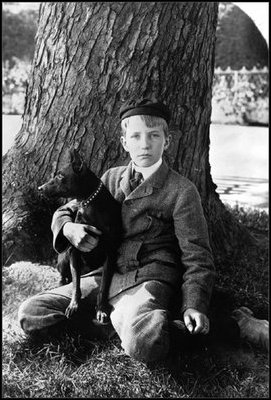 One of the beloved family dogs in the Roosevelt White House was a Manchester terrier ...